I’ve always enjoyed painting African scenes from memories of my childhood as well as inspiration from other painters whose work my mum and dad liked and we had in our house. Some of the artists include Peter Birch who painted houses and town scenes, Joan Evans (landscapes) as well as Pat Hesketh and David Shepherd who both were great painters of animals.

I recently depicted a lioness lurking in the long grass and had good feedback from artist friends and family. This contrasts with a Rhino I painted in 2015 in terms of style and colouring. The African bush often has a range of yellows and browns and I achieved this in the earlier Rhino piece, but the lush greenery of the lioness one was perhaps slightly too verdant for the part of Africa I’m focussing on.

So in my new chalk pastelle piece called ‘Predator’ I’ve focussed more on the yellows and browns of the savannah, initially creating wild swathes of grass, which were somewhat flamelike in the early stages. Later these became straighter as I worked into the colour to reflect the true grassland style. 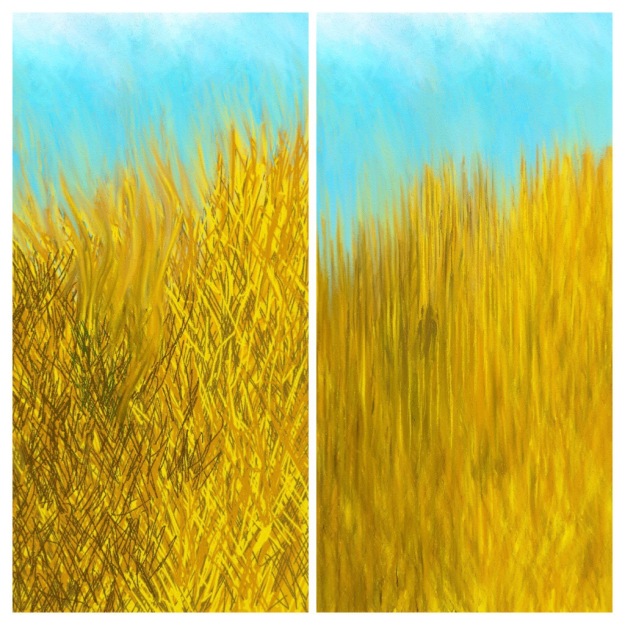 Initially I added a figure to the piece to give a sense of mystery but after some further thoughts created instead a large cat prowling through the grass in search of prey. This would perhaps be an unsuspecting impala in the distance. I added a small mammal hoping to escape unnoticed by the hunter in its search for larger game.

To give the piece a sense of scale and distance I added the Msasa trees with the iconic canapies of leaves giving the piece a more African feel.